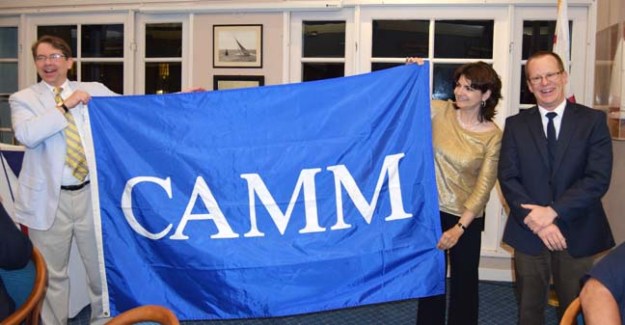 Marifrances Trivelli hands over the CAMM banner to Sam Heed of the Kalmar Nyckel Foundation as CAMM president Dave Pearson looks on. The handover of the banner from the 2015 host, Los Angeles Maritime Museum, to the 2016 host took place during the final dinner of the 2015 CAMM conference.

The 2016 CAMM conference will take place in Wilmington, Delaware, at Kalmar Nyckel Foundation’s new Maritime Center on April 25 – 27. This year’s conference will be extended from two to three days in order to include professional training sessions that will supplement the traditional programming. The 2016 CAMM programming committee is being formed and will soon be issuing a survey to determine the topics of most interest to CAMM members.