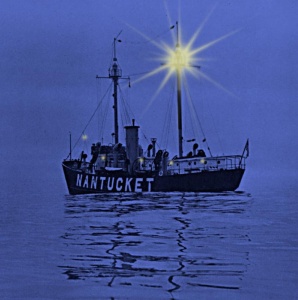 “On Friday, August 7, 2015, Nantucket Lightship/LV-112, a former commissioned U.S. Coast Guard (USCG) floating lighthouse (1936-75), National Historic Landmark and National Treasure, will commemorate the restoration of its historic 500,000-candlepower light beacon (23-mile range) and the activation of its foghorn (14-mile range) at its homeport berth in Boston Harbor. At dusk on August 7, Nantucket/LV-112’s bright and guiding main light beacon will be turned on once again for the first time since the ship was decommissioned at the USCG-Base Boston in 1975 and its navigational aids were extinguished. The restoration of LV-112’s light beacon, foghorn and radio beacon tower components were made possible by a generous grant awarded to the U.S. Lightship Museum (USLM) by American Express, facilitated by the National Trust for Historic Preservation.

The date for celebrating lighthouses is based in America’s maritime heritage. On August 7, 1789, the United States Congress approved an act for the “establishment and support of Lighthouse, Beacons, Buoys, and Public Piers.” Two hundred years later, Congress designated August 7 as National Lighthouse Day. It provides recognition for the important maritime role played by lighthouses and lightships (floating lighthouses), vessels stationed in waters where it was unsuitable to build lighthouses.”