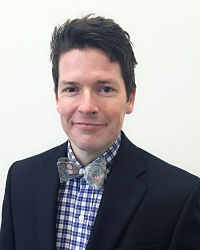 Mystic, Conn. (April 7, 2016) – Mystic Seaport announced today that Nicholas R. Bell has been named Senior Vice President for Curatorial Affairs, a new position at the Museum that will be responsible for the care, management, strategic development, and exhibition of the Museum’s collections. Bell will assume the position June 1, 2016.

Bell is presently The Fleur and Charles Bresler Curator-in-Charge at the Smithsonian American Art Museum’s Renwick Gallery in Washington, DC, where he led the Gallery’s recent relaunch following a $30 million, two-year renovation. The reopening exhibition, entitled “WONDER,” explores the museum’s value to American culture and identity by presenting nine gallery spaces to site-specific installations by leading contemporary artists. The innovative project brought success and tremendous acclaim to the Renwick—museum attendance has increased 1,000 percent since its reopening.

“We are very proud to have a curator of Nicholas’s caliber join Mystic Seaport. We believe his deep knowledge of material culture, understanding of the public audience, and demonstrated leadership and creativity will take our collections and exhibitions program to a new level,” said Steve White, president of Mystic Seaport. “The combination of the Thompson Exhibition Building opening this fall and this new leadership position truly signify that Mystic Seaport is moving into a new era of exhibitions.”

During his eight years at the Renwick, Bell curated six major exhibitions. The diverse projects included the thematic “WONDER;” a highly praised generational survey “40 under 40: Craft Futures,” organized to celebrate the Renwick’s 40th anniversary; the monographic “Untitled: The Art of James Castle;” and the presentation of groundbreaking research in “A Measure of the Earth: The Cole-Ware Collection of American Baskets.”

Bell’s vision expanded the Renwick’s focus from a narrow definition of craft to include a broad array of creative practices illustrating skilled making as a multifaceted approach to living in the modern world.  He reinvigorated the museum’s permanent collection through targeted purchases and gifts, including the gift of a landmark Dale Chihuly chandelier, the acquisition of the largest public collection of American revival baskets, and the second largest public collection of works by seminal self-taught artist James Castle.

Along with his curatorial accomplishments, Bell worked with the Smithsonian American Art Museum’s development team to raise funds to endow two curatorships and support the Renwick’s renovation. He also was part of a select group of Smithsonian experts who participated in TED talk-style presentations across the U.S. for the Smithsonian’s $1.5 billion capital campaign.

Bell has published seven books in the last five years, including six peer-reviewed exhibition catalogues and one edited anthology. He additionally positioned the Renwick as a center for scholarship with two international symposia in the past three years that have featured nearly 40 speakers.

”No matter how far we live from it, as Americans, the sea is bred in our bones. I believe the inclusiveness with which Mystic Seaport defines this relationship is the Museum’s greatest asset to building new connections with the public it serves,” said Bell. “Expanding on these connections is a thrilling opportunity, and I could not ask for a stronger team with which to embark on this adventure than the one already in place at the Museum.”

Bell earned a bachelor’s degree from Simon Fraser University in Vancouver, British Columbia, and a master’s degree from the Winterthur Program in American Material Culture at the University of Delaware. Bell, his wife, Allison, and their three children will be relocating to Mystic, Conn. this spring.