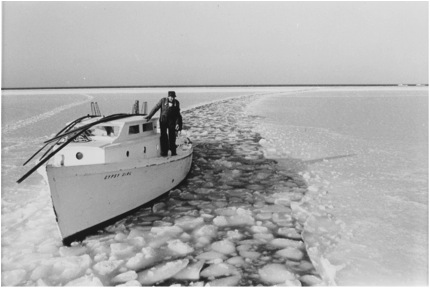 A traveling exhibition, titled “Robert de Gast’s Chesapeake,” featuring the striking work of photojournalist Robert de Gast is offered by Chesapeake Bay Maritime Museum (CBMM). De Gast’s work—evocative, stark, and infused with a keenly abstract sensibility— ranges widely in subject and treatment. Whether his vibrant perspective on the places and culture of oystermen’s work, the sense of solitude that he sought in his solo voyages, or the abstract shapes and details of remote lighthouses, De Gast’s images are complex and informed by the modernist aesthetic. As he said to his photography students, “if you’re unhappy with the picture, you’re not close enough.”

De Gast’s black-and-white photography gained widespread attention with the publication of his 1970 book The Oystermen of the Chesapeake, a work that, according to Smithsonian curator Paula Johnson “builds a more nuanced, more atmospheric portrait. It is not a romanticized look at the work.” De Gast’s black-and-white photographic work, encompassing more than 10,000 images, is a key collection of the Chesapeake Bay Maritime Museum.

For more information about this exhibit, download the full announcement at de Gast Traveling Exhibition Summary